It’s been a huge equal rights week here in FL, and everything lately seems to follow the pattern of good news, bad news.

GOOD NEWS: Monroe County rules Florida’s same-sex marriage ban unconstitutional! This victory only applies to one county, but is a first and vital step toward full marriage equality in FL, and ultimately across the South.

BAD NEWS: AG Pam Bondi immediately decides to use taxpayer resources to appeal the ruling. As FL taxpayers, you can probably guess how my wife and I (and thousands of other married but unequal Floridians) feel about that decision. 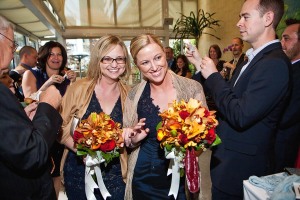 BAD NEWS: Florida is still one of 29 states in the US where no such protections exist at the state level.

BAD NEWS: US Senator Marco Rubio of FL promotes the false equivalency of marriage equality activists’ “intolerance” toward those that want to ban it. Here’s the problem, Sen. Rubio. Your intolerance impacts our equal citizenship rights under the law. No one in the marriage equality movement, as far as I know, has advocated for only same-sex unions, and the outlawing of heterosexual marriage. If they did, you would have an argument. However, the right to a legal and equal civil union for all US citizens is not an intolerant view. To suggest otherwise is irresponsible.

I know this blog is generally about RA, but this is too important not to share. Thanks for listening!

When where we've been intersects with where we're going

Crohn's Survivor, Mommy of 2, Full Time Working Mom…busting bellies one at a time!

Moving On Up a Little Higher

Because I can't keep silent